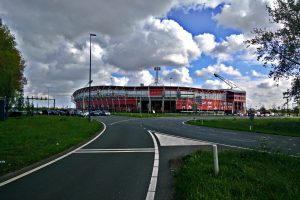 A double date in Alkmaar this weekend with Jong AZ - GVVV and AZ - FC Twente on the same day and easy to combine. As AZ are in the running for the Europa League play-offs, they couldn't afford to drop points. FC Twente are also still in the play-off positions but are banned from Europe until the end of the 2018/19 season.

Both sides got a few chances in the first half but no goals were scored at the break. 20 minutes after the break the visitors from Enschede managed to make the first goal. The home team wasn't really devastated and went looking for the equalizer instantly.

With only 10 more minutes to go AZ managed to equalise and in the 90th minute they even scored the winning goal, keeping the 3 points in Alkmaar.

The AFAS Stadium is a rather new ground (2006) and looks like most of the new Dutch ground except from the fact that it has a more special design on the inside and on the outside.