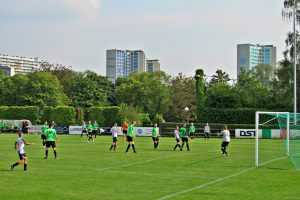 For today I planned RUS Rebecquoise vs WS Brussel but when I arrived at the ground it was quite calm.. too calm.. Until I saw a note at the entrace "No game today as WS Brussels forfeited the game this morning at 8.15".. oh well great. Luckily I quickly had an option B as FC Ganshoren played at home.

I should have arrived at FC Ganshoren when the game was 5' on but my GPS also let me down this time, which meant I arrived after 25 minutes and a 1-0 on the scoreboard and still having to pay the full price. The other 65 minutes were very entertaining with both team missing a few big chances and JS Taminoise being very very unlucky as they deserved at least a draw this afternoon.

About FC Ganshoren; the club was founded in 1971 and played most of their history in the provincial leagues. Between 1975 and 1997 the club always played at the 1st of 2nd provincial tier until they relegated 3 times in just 4 years to the 4th tier. But the relegation was actually some kind of "new start" for FC Ganshoren. After 13 more years in the provincial leagues, the club gained promotion to the national 4th division in 2011 in which they're still active (~ 5th division actually because of the reconstruction by the Belgian FA).