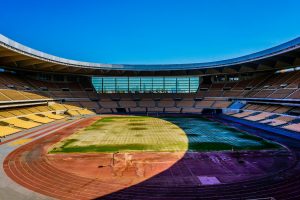 After a long walk from my hotel through the city center I ended up at Estadio Olímpico de La Cartuja (+- 20km..). The beautiful but modern ground was built in 1997 and opened in 1999. The stadium is 5-star rated by the UEFA and can hold 57.619 fans which means it’s one of the bigger grounds in Spain. It was actually built